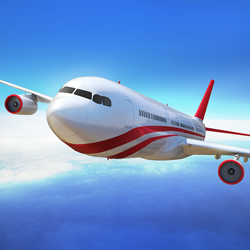 This is by far, one of the best and most accurate flight simulators that has ever hit the market! No, I’m not joking. This app is simply addictive, engaging and offers a whole lot of fun for any individual who has ever looked at a plane and wanted to fly one! That said, you won’t get a pilot’s licence playing this, but does it matter? Nope, not one bit as long as you have this game! I have spent close to a good 15 hours on this game over the last week reviewing it and all the features it offers and am yet to feel the need to put the phone down.

The app itself is quite well designed, with clean layouts and an interface that is quite simple.

The throttle to your plane is on the right and is a slider. The gyroscope controls take-off and landing – tilt to move up or down, and turn left or right to turn the plane. The game begins with a simple tutorial that is part of the Novice stage. As you progress through the game, you earn coins for each successful mission which you can collect and purchase upgrades and different planes. There are special missions which require the purchase of a specific aircraft. While the economics of the game are pretty rudimentary, the key to the game being such a hit is the interface and graphics. The game simply is visually stunning, and the responses are realistic. The additional free flight mode lets you carry out multiple missions where you land and take off from different airports, thus offering a whole lot of options. The app is free to install and offers in-app purchases for upgrades and enhanced aircraft. Despite the fancy tags, cool color scheme and cost of real money, the performance difference is quite minor in between the planes you buy with game cash, and the planes you buy with your cash. This game has undergone several upgrades, all of which add more stability with each new iteration. It isn’t too resource heavy, and doesn’t drain the battery as fast as other games of this genre do. The app is available on both App stores, and is available for devices featuring iOS7 and up, and Android 2.3.3 and up.