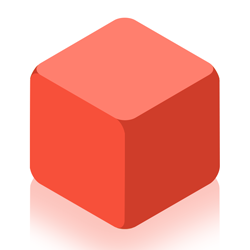 Simply one of the most appealing games in the app store, the 1010! App is a sort of reverse-Tetris that lets you place individual building blocks on to a grid at any location. One of the most fascinating things about this game is its ability to take us back to the days of the Nintendo handheld, where I have spent countless hours on this game.

The rules are simple, arrange the blocks and complete the lines to earn points. One of the major changes in this game is that the lines can be made vertically or horizontally. The cleared lines leave behind the other blocks in the same place, without dropping them to the bottom level which adds a whole new layer of complexity to the game.You start off with three pieces which you can place anywhere in a 10*10 grid. As the pieces are exhausted, you get more in sets of three. The game ends when you have no more room to add the pieces in hand, onto the grid.
1010! is an interesting take on the classic game, and takes it one step further than the regular Tetris, where the blocks are not restricted to being in differing shapes of 4 units each. In 1010!, each block can be made of a single unit to 5 units, all in different forms. You can set personal records and compete against friends and others on the game’s leaderboards.
The cons to this game are that the app is known to be a battery drainer, however, the latest update has offered improved usage and battery efficiency. Also, the pop up ads can be a minor niggle when playing the game.
The app runs on both iOS (iOS7 and up) and Android (2.3 and up)