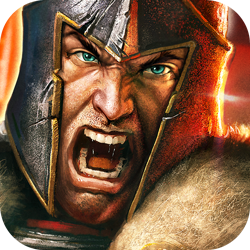 Game of War (GoW) – Fire Age is a massive throw back to the wonderful MMORPG games such as Clash Of Kings. While GoW has a plot line and theme similar to the MMO games, it does stand out in its appearance of the classic 90’s MMO games such as Age of Empires and its several iterations. GoW is based on the standard MMO mobile strategy game platform that has been the basis for several games before it. The format of the game is typical – you are the king of a fledgling kingdom, and you are required to try and build the most powerful kingdom possible

The downside? Everyone else on the game is doing exactly that. In the campaign section, the focus lies on building your kingdom up from scratch. Guided by Athena, the helpful in-game tutor, you begin by learning the basics – how to build resource buildings including farms, lumber camps, mines and quarries; and strategy buildings such as the barracks, academy and so on. Each structure follows the regular theme of build-and-wait for the construction to be completed. You can use gold to boost your construction or research on not just the buildings, but also the playable characters and units. The military aspect of the game involves the building of defensive structures such as walls, and traps within the walls; and also the creation of troops and special units that can go on the offensive to attach other cities and kingdoms to increase your loot through plunder. A hero unit that can be levelled up leads the military units. The game follows the standard script that is seen with most of these games including Clash of Kings and Kingdoms of Camelot. The major issue that I found with this game is that it offers too much on limited screen space. There seems to be too much going on all at once – from chat pings to campaigns, tasks, chores, buildings and what not, all in the confines of your mobile screen. The interface seems too cluttered – probably the result of wanting to have what you see on a PC screen all to appear on your mobile device. The app is free to download and install, but offers in-app purchases for gold and other resource packages. If you are into MMO’s that have a slightly retro feel like Dragons of Atlantis, then this app should definitely be on your mobile device! Available on both app stores for devices supporting iOS7 and up, and Android 2.3 and up.