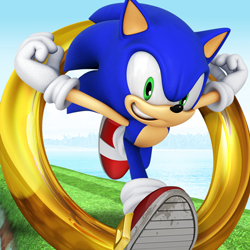 Sonic Dash has to be another childhood favourite brought to life on the small screen! In this new, recast mobile version, Sonic Dash has promised it is going to be bigger, better and more fun than the console versions.

I didn’t really get my hopes up too much because so many other apps have been a let down on their first attempt compared to the console version (Mario Kart and Crash Bandicoot spring to mind). However, Sonic Dash is thankfully not too much of a departure from the standard console runner that has been a favourite for so many years.

The interface is pretty much bang on track with the console. The game is a runner, where you go through each level, speed increasing as you cross each milestone. You collect rings and bonuses with which you can purchase upgrades for your character, and use it for power-ups to beat the bosses. Sonic Dash has an almost arcade feel to it, where you immediately get drawn in by the bright colours and artwork.

The controls are simple, as your character runs, you swipe left or right to change lane/avoid obstacles, swipe up to jump over an obstacle, and swipe down to slide under an obstacle. In addition to this, the game also features swiping during a jump to pose for additional points.

The game does feature a few ads that do seem a little annoying when you are focused on playing the game repeatedly, but it is a minor annoyance, nothing more. The arcade themed looped music helps you forget this and eggs on your inner child to come out more and more as you keep playing this legendary game. The game is free to play, and offers in-app purchases for Rings and Red Star Rings (used for buying upgrades, boosts and characters). Available for devices running iOS7 and up, and Android 4.0 and up; if you have ever been a console gamer and had some modicum of love for your old Sega and Nintendo, then this is one game you should have.